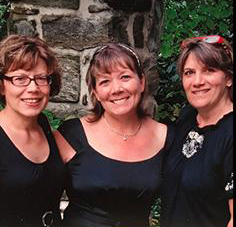 Debra (Crumb) Quigley '81 (pictured with her sisters, Darcy '79 and Lori '81) cannot stress enough what her SUNY Corning Community College education meant to her. Attending SUNY CCC gave her the opportunity to discover her interests and realize the possibilities available to her.

“I received a great education at CCC and had top-notch teachers.”

Her Nursing degree was her ticket to the world; she knew her degree would open the door to many possibilities. It would ultimately lead her from her native Elmira to North Carolina and beyond.

In 1978, during her senior year of High School at Elmira Free Academy, Debra (Debbie) Quigley’s guidance counselor asked about her plans for continuing her education. Debbie responded, “I’m not going to college; my family can’t afford that.” Her guidance counselor thought differently and told her she would help her find scholarships in order to enroll at SUNY Corning Community College.

With the help of her guidance counselor and having secured scholarships, Debbie enrolled in the Nursing program at SUNY CCC in 1979. Debbie chose Corning because it was “affordable and I had transportation from relatives who worked in Corning.” Upon graduating in 1981 with her AAS in Nursing she immediately went to work at St. Joseph’s Hospital in Elmira.

“In that era, all you needed was a two-year degree to work as a nurse.”

Less than a year later, she and a friend decided to take a leap and moved to Durham, NC, where they both landed nursing jobs at Duke Medical Center. Over her 13 years at Duke she met her husband, Dr. Robert Quigley, and continued her education attending night school at North Carolina Central University. While working as an RN in the Burn/Trauma Unit, she earned her BS in Nursing and enrolled in NCCU’s Law School where she graduated in 1990 with a JD. While attending law school she continued to work weekends as a nurse. After earning her JD and passing the bar exam she worked as a lawyer for six years. When her husband’s career took the family to Chicago, she continued her legal work and then headed back to Elmira and ultimately Philadelphia.

In 2003, Debbie decided to establish a scholarship in memory of her cousin, Kelly Skoreski '00. Kelly was employed at Corning Incorporated when a car accident led to her untimely death. Kelly earned an associate's degree at SUNY CCC in Mechanical Technology. Debbie, understanding how a college education may be out of reach for so many, wanted to give back to SUNY Corning Community College and help other students, like her late cousin, achieve their dreams. She established the Kelly Skoreski Memorial Scholarship which benefits a full-time student in the Nursing program who graduated from a high school district in Chemung County, saying, “Every year, I read the scholarship recipient letters with adoration.”

Their stories are often similar to her own.

Debbie is quick to point out the benefits and opportunities she received from her start at SUNY CCC. Her two sisters Darcy '79 and Lori '81 and late brother-in-law, Tony Negri, are also proud alumni. Debbie is forever grateful to SUNY CCC and the great start it gave her as she pursued her careers in nursing and law. Having successfully raised her two children, she’s excited to launch her new career in Real Estate.