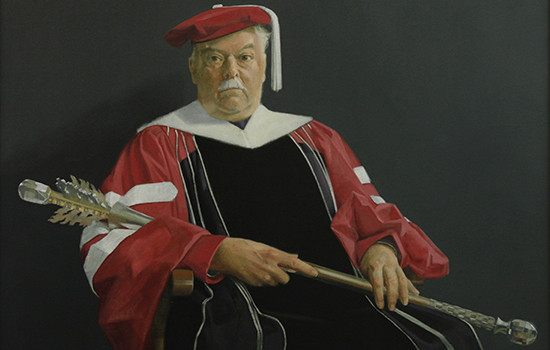 In November 2004, Walter R. Smith, retired Professor Emeritus of History & Government at Corning Community College, announced his intention to provide up to $50,000 over five years as a matching gift challenge in support of a visiting scholar series initiative created through the College's first-ever Major Gifts Campaign. He vowed to match any contributions made from individuals, foundations, or corporate funding sources. In light of his generous contribution, the Series was named for Walter R. Smith.

Walter Smith worked at the College for 50 years before retiring in 2008.  As a historian, Professor Smith’s disciplinary content knowledge was deep and wide, yet his teaching of challenging material was accessible for students of all levels. His scholarly contributions included reviewing articles for numerous professional journals and interviewing notable scholars such as Robert Frost, Ralph Nader, and Buckminster Fuller. In addition, he was CCC’s representative to SUNY’s Faculty Council of Community Colleges and served as its Chair. Most recently, he was selected to receive the Outstanding College Citizenship Award by the National Institute for Staff and Organizational Development (NISOD) in 2014. Walter Smith passed away on December 12, 2015, but his legacy will continue on at CCC as we regularly invite scholars to campus for the Walter R. Smith Visiting Scholar Series.