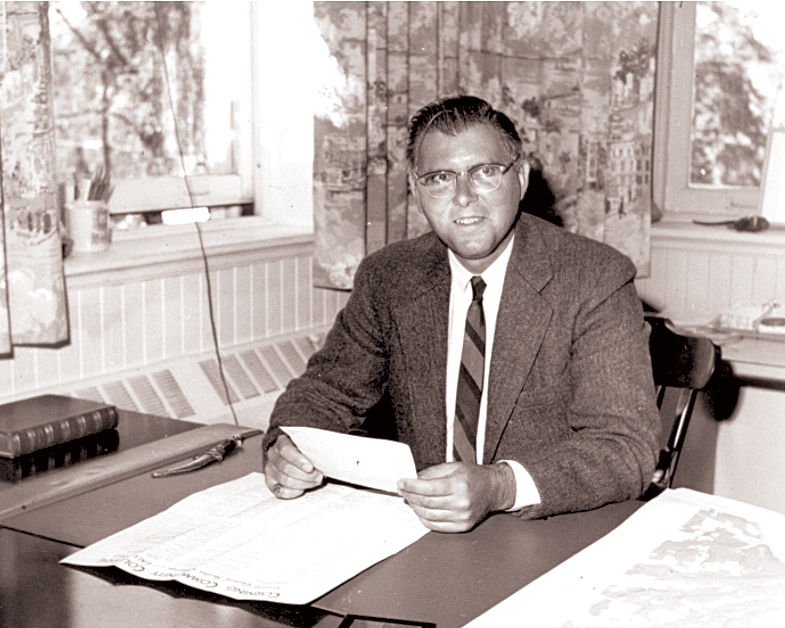 Under the sponsorship of the Corning-Painted Post School District, Corning Community College opened its doors in September 1958 with eight faculty members and a student body of 118. The new college was led by 32-year-old Dr. William Lee Perry [pictured] and started in a Corning School District building on Chemung Street.

By 1960, the College enrollment increased to 350 full-time students and 260 part-time students, with the number of faculty doubling to 16. The College continued to grow and began looking for a permanent home. In October 1960, thanks to a generous gift of land by Arthur A. Houghton, Jr. and a $2,250,000 donation from Corning Glass Works Foundation, the College began construction of a new campus on Spencer Hill.

Dr. Perry spearheaded the planning, design, and construction of the College on Spencer Hill, and classes began on the hill in the fall of 1963.

The campus was formally dedicated in May 1964, and it received its first Middle States accreditation in June of that year.

When Dr. Perry left in June 1966, full-time faculty had grown to 70, with the College organized into six academic divisions. Dr. Robert W. Frederick, Jr. became the College’s second president in July 1966. The College celebrated its 10th birthday in 1968 with a graduating class of 524 — nearly 10 times the size of the first graduating class in 1960. In 1970, the College added the Nursing Building, increasing classroom capacity by 25 percent. Then in 1971, a new maintenance building helped increase classroom space by moving maintenance staff out of the academic buildings.

When Dr. Frederick left the Presidency in 1975, the number of full-time faculty had risen to 84, and the College had expanded to eight academic divisions. Also, the Goff Road building had been added to the College’s facilities. When Dr. Donald Hangen accepted the position as the College’s third president, the student body had grown to 1,952 full-time and 832 part-time students.

Dr. Hangen served the College as president until 1994. His administration saw the addition of the Learning Resource Center, the Business Development Center, and the Eileen Collins Observatory. In 1993, the College had 1,717 full-time students and soared to 2,221 part-time students.

The combined full- and part-time students accounted for the greatest number of credit hours taught in the College’s history. It was also the second year that part-time headcount would exceed full-time headcount, a trend that has remained consistent to the present time.

A critical change in the College’s operation occurred in the middle of the Hangen administration as the Corning-Painted Post School District became unable to sustain financial support of the College. After considerable effort, the College developed into the first regional community college in New York. Unlike other New York community colleges, Corning receives funding from Steuben, Chemung, and Schuyler counties through a chargeback system that provides revenue based on the number of students from each county. Under this system the College continues to prosper.

When President Hangen retired in 1994, Dr. Eduardo Marti became the College’s fourth president who continued the expansion of the College. By the time Dr. Marti left in 2000, the College had added the Planetarium and the Airport Corporate Park facility, housing automotive and machine tool technology programs.

In August 2007, the Academic and Workforce Development Center in Elmira opened its doors to address the need for skilled employees, to attract new jobs to the region, and to assist the success of entrepreneurs and established businesses. The Center now houses many credit and non-credit courses, including the new welding facility, while also housing community service partners.

In the fall of 2009, the College saw enrollments of 2,559 full-time and 3,113 part-time students, a far cry from the 118 students in 1958. The College also saw tremendous growth in its off-campus enrollments, including a near doubling of students in its high school concurrent enrollment program.

During the summer of 2011, the College welcomed Dr. Katherine “Kate” Douglas, the College’s sixth president. During her first year in office the entire campus community engaged in a deliberative examination of the College’s mission, vision, and values. Dr. Douglas’ inauguration ceremony was held in April 2012, and shortly thereafter, the College kicked off a Strategic Planning effort to focus on the College’s strengths and move the institution forward.

Following two years of careful study, the College’s Regional Board of Trustees unanimously approved student housing on the hill, and construction of the three-story residence hall began with a groundbreaking ceremony in April 2012. The $16.8 million building initiative was underwritten by the Corning Community College Development Foundation using no public funds.

In March 2013, the College’s Regional Board of Trustees voted to honor Dr. William Lee Perry, founding president of Corning Community College, and his wife Carolyn Perry, by placing his name upon the new residence hall. Perry Hall was completed in August 2013 allowing the College to welcome its first residential students for the fall of 2013 semester.

Members of the Perry family — along with members of the College community from past and present — attended the Hall dedication on May 23, 2014, exactly 50 years to the day of when the Spencer Hill campus was dedicated by President Perry.

In January 2013, bringing closure to a facilities planning process begun in 2007, the College’s Regional Board of Trustees approved a renovation and renewal plan for the Spencer Hill Campus. The plan included renovations and an addition to the Arthur A. Houghton, Jr. Library, the Student Commons building, and the Gymnasium along with construction of a new turf field. The $23.3 million investment of these projects was celebrated with a groundbreaking ceremony in April 2014 attended by federal, state, and local dignitaries. Work on these three projects was completed in March 2015. The Author A. Houghton, Jr. Library opened in January 2015.

In March 2015, SUNY Corning Community College held the ribbon cutting for its state-of-the-art welding facility in the Academic and Workforce Development Center in Elmira for its non-credit Welding Technology Program.

In April 2015 the College underwent its accreditation visitation by the Middle States Commission on Higher Education, with the visiting team reporting that SUNY Corning Community College met or exceeded all fourteen of its standards of excellence.

In 2016, the College was ranked the top two-year college in New York State and welcomed the first class of students to the Southern Tier STEM Academy.

Construction began on the Health Education Center, a new state-of-the-art complex designed to serve the educational needs of aspiring healthcare professionals. The College received its first $1million gift from an individual donor, Professor Emeritus Walter R. Smith, to endow a Visiting Scholar program in his name.

In 2017, the College launched a new academic program, Community and Public Health, saw the Red Baron mascot advance to the Final Four of SUNY’s Mascot Madness annual competition, and welcomed the largest entering class of Nursing students to the technology-rich Health Education Center.

In 2018, the College renamed several buildings in recognition of the support received from our sponsor counties. Schuyler Hall, Steuben Hall, and Chemung Hall are now central to the student experience at SUNY CCC.

In the summer of 2019, CCC welcomed Dr. William P. Mullaney to serve as the College’s seventh president. His vision for equity in education along with  advocacy for STEAM innovation and continued expansion of healthcare programming continues to inspire excellence.

In 2020, the College launched a public/private partnership with Siemens and celebrated the ceremonial groundbreaking for the STEAM Innovation Center, the future home for the Mechatronics academic program and the Innovation Hub, where interdisciplinary research will spark new discoveries.

All of us at SUNY CCC recognize, embrace, and celebrate the changing future we are creating together for our students and our communities. We are striving to build a socially, environmentally, and economically sustainable academic enterprise dedicated to transforming the lives of our students, strengthening our communities, and inspiring success that lasts a lifetime. SUNY Corning Community College remains a strong and vibrant institution dedicated to serving the educational and cultural needs of our students and our surrounding communities.

Make Your Own History at SUNY Corning Community College.
We welcome you to share your story with our story and together we will prosper and grow.