Haley Brown: A Love for the Stage 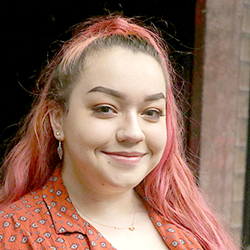 Haley Brown starred in her first full-blown production as a sophomore at Corning-Painted Post High School. Back then, she says she believes her love for the stage came from the creativity she possessed as a child.

“I was always making up dances and songs and I'd force my sister to be in them,” she recalls. “I'd choreograph it all and then we'd perform it.” But aside from a clear desire to be on stage, Haley says she was also writing plays at a young age. Those, however, never quite saw the light of day.

Fast-forward to that first role: with a cast of nearly sixty students, she played an ensemble member in C-PP High School's production of West Side Story.

It was simple, but she was hooked.

From there, she went on to recite her first line in Scrooge: the Musical. “I still remember it was, 'why Mr. Scrooge, it's Christmas Day!” Haley recalls.

While Haley lists numerous fond memories she has within her high school production days, she says it wasn't until she got involved with theatre at SUNY Corning Community College that she really found her place in the spotlight.

“Having been offered these specialized acting courses has been amazing,” she says. “I have a new understanding for all of these genres [of theatre] I never thought I would.”

She says, for example, Shakespeare.

During her time at SUNY CCC, Haley has become the president of the Muse of Fire Drama Club, which puts on two faculty or guest-directed productions a year, in addition to an anticipated summer production. The club also works to put on staged readings of student-written works, in addition to 24-hour theatre events and other creative pieces for the public.

“If I could focus on theatre every day of my life, I would,” says Haley. “There's [that bit] where people say 'that job that makes you happy, so it doesn't feel like a job.”

Haley has now begun looking at a handful of four-year colleges as her time at SUNY CCC nears the end. It's not surprise she's, of course, looking at those with strong theatre programs.

But she hasn't ruled other avenues out, either. Again, she credits SUNY CCC for helping her see how else her love for theatre can translate out in the real world.

“I'm really good at talking to people and I'm social. I feel like I could combine all of the marketing courses [I've taken] with my experience and love for theatre.”

When asked what she's taken away during her time so far at SUNY CCC, Haley first lists the handfuls of professors she's had along the way. “They want to help you if you want the help. They work with you and that's amazing.”

She then speaks of her fellow classmates, calling many of them her dearest friends.

“I've met people here, most through theatre, who are like a family. You spend so much time with these people who are so much like you and who have the same passion you do,” she explains. “I'm thankful for that.”