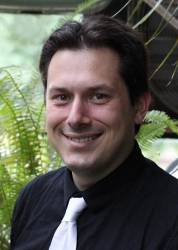 Dr. Robert A. Koble earned his PhD from the University of California, Riverside in 2015 and his B.S. in Cell Biology from University of California, Davis in 2009. His PhD work involved understanding the molecular mechanisms of how plants respond to light through modulating the angle of leaves. Robert also worked as a coordinator of the Graduate Student Mentorship Program at UCR to increase the retention rate of graduate students. Robert’s main goal for student success is to ensure students have an appreciation for the world around them. By understanding the basic principles of Biology, students can be better inhabitants of the Earth and not take its natural resources for granted. He also believes that a major function of college is to teach students critical thinking, which is a valuable and necessary skill as an adult. Robert is the Adviser for the Science Club and curator of the CCC Carnivorous Plant collection.

Robert is a native Californian and supports the San Diego Padres, Chargers, and Gulls (yes, as in Seagulls, the minor league hockey team). He is an avid baseball and softball player and plays the violin, viola and electric bass.